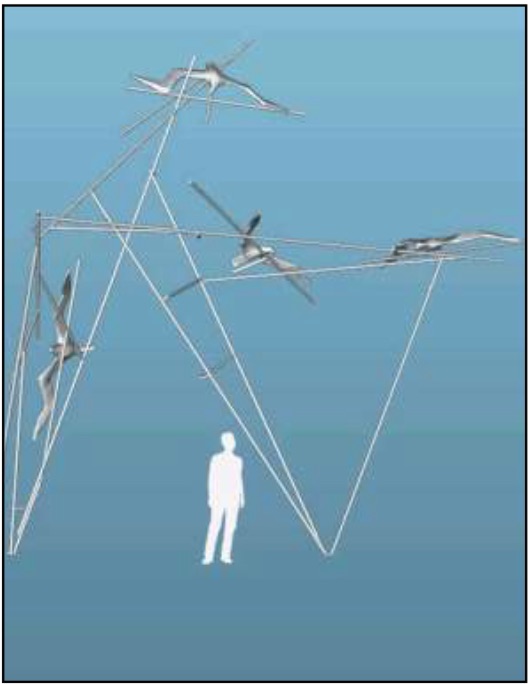 The relocation to Victoria Wharf of the artwork Flight Trainer for Albatross has been approved by the Devonport-Takapuna Local Board.

Despite some previous reservations about the appropriateness of the sculpture for Devonport, the board last week approved siting it on the wharf, after support was received from “stakeholders” including the Auckland City Sculpture Trust, Depot Artspace, the Devonport Business Association, the Devonport Peninsula Trust and Whitespace.

While the sculpture would not take up a large portion of the wharf – which is used by recreational fisherman – it could be seen as encroaching on an open space. The fishermen were not consulted.

“While some users of the wharf may be dissatisfied with the decision to site the artwork here, the placement of the artwork may also draw people onto the wharf that may not have gone there otherwise…it may ultimately increase the number of people who use and discover the Victoria Wharf as a useable open space,” a report to the board said.

In support of the sculpture, Lynn Lawton, Depot Artspace manager, said the sculpture was “an outstanding contemporary artwork by an iconic Auckland sculptor” Greer Twiss.

“The Devonport waterfront is sadly bereft of sculptures and this work would add to its aesthetic as well as to its identity,” he said.

“In many ways this is an ideal sculpture for it represents Devonport’s reputation as an arts-centred community and its history of activism relating to significant social issues.”

Devonport Business Association chairperson Dianne Hale said its members were surveyed and all but one were supportive. One art gallery owner felt the sculpture should be located further south as the albatross was not “common to our shores.”

The sculpture was originally located on the other side of the harbour.

Member Jan O’Connor voted against it. She was “uneasy” about its location. “It’s a wonderful sculpture but I’m not sure how it sits in a heritage area… it may be more appropriate at the Naval museum. It’s not comfortable at the Victoria Wharf.

“I do not think Greer Twist is a heritage sculptor.”

Board member Mike Sheehy disagreed. “I think it would be a drawcard to the wharf and a lot of people would go there to see it.”

Member Mike Cohen said the sculpture had been remodelled but there was no-up-to-date picture of it before the board to help with the voting process.