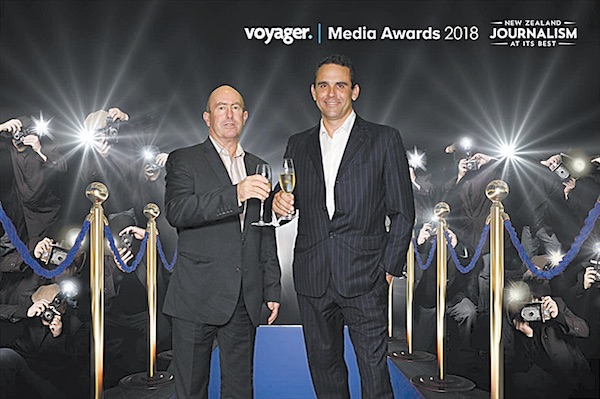 The Devonport Flagstaff is a member of the New Zealand Community Newspaper Association (CNA) and has been recognised many times in the annual Independent Better Newspapers and Independent Community Newspapers Better Journalist and Photographers competitions. Flagstaff has also been highly commended in the NZ Canon Media Awards which judges all NZ media including mainstream outlets: Among the awards won by the Flagstaff and the team are:

Metro Magazine, Best of Auckland Best Community Newspaper — Winner in 2006; runner up in 2005.

CANON Community Newspaper of the Year — Finalist in 2017

Of all the awards it has won, the Flagstaff is most proud of the recognition it has received for community involvement.

One of the national awards received by the Devonport Flagstaff for community involvement was in recognition of its campaign in 2011 to eradicate the synthetic cannabis drug Kronic from Devonport dairies. The campaign was covered by national TV and radio, and many other communities across Auckland and the rest of the country began asking their local dairies to stop selling it. The Flagstaff received numerous emails and calls from parents congratulating the paper on its stance.

Other key campaigns run by the Flagstaff have also been recognised by awards. These include the successful backing of Victoria Theatre supporters to reopen the performance facility; the editorial stand the paper took against the government which helped save coastal at Fort Takapuna from residential development, and the paper’s ongoing commitment to retain the built heritage of the historic suburb.

The Devonport Flagstaff masthead has two origins. The suburb was originally called Flagstaff until renamed Devonport, after the naval town in England. Flagstaff/Devonport played an important role in Auckland commerce in the early years of the city. A signalman’s house was located on Mt Victoria (still there today as the Michael King Writers’ Centre). When ships were approaching Devonport, the signalman would fly signal flags to alert merchants in downtown Auckland to which goods the ships were carrying. The merchants would then rush down to the waterfront to upload the goods.